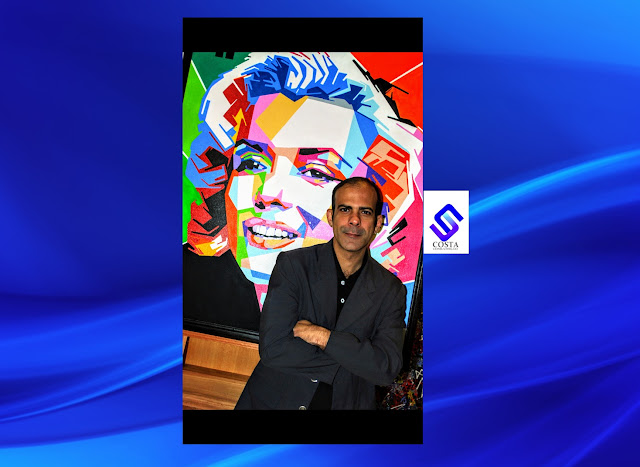 The artist Celau has always been passionate about all types of arts. He lived his life alongside family artists from other areas, and this fascinated him with the life of an artist. Celau is a self-taugth artist who started painting his hand 15 years ago...his initiation to painting only lasted a year, because living in a small city in Bahia, had difficulties to publicize his work and this left him without stimulation and stopped painting. After 13 years, Celau is back to painting and now screens...with great inspiration by Pop Art, influenced by Andy Warhol, Basquiat, among others pop icons. Celau's paintings draw attention to the vibrant colors and harmonious combination of colors. The artist stands out mainly for the firm trait, where everything is required to be very straight; and also of its abstract pulses that please the eyes and transmit joy. 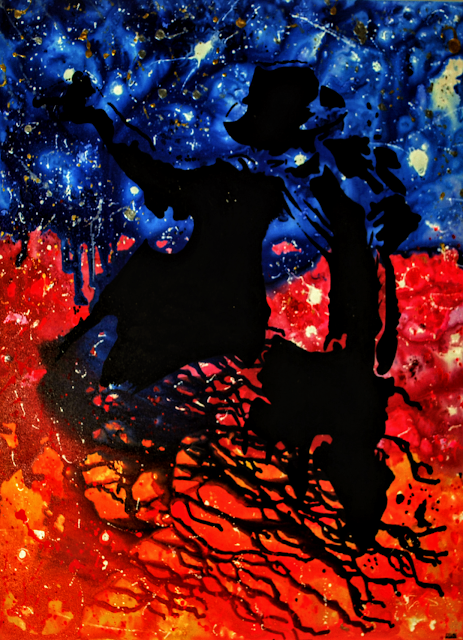 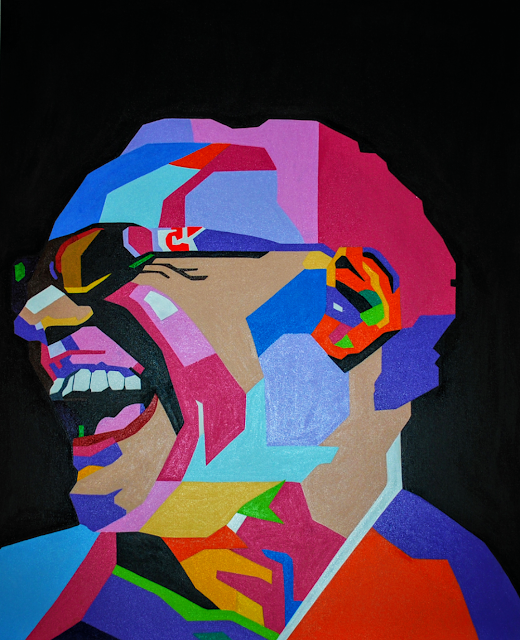 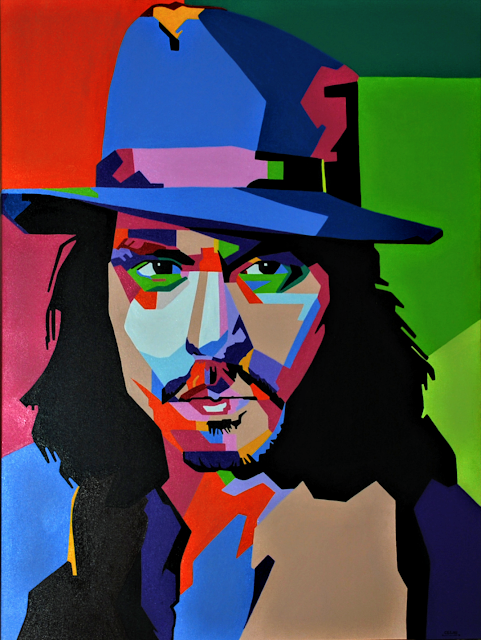 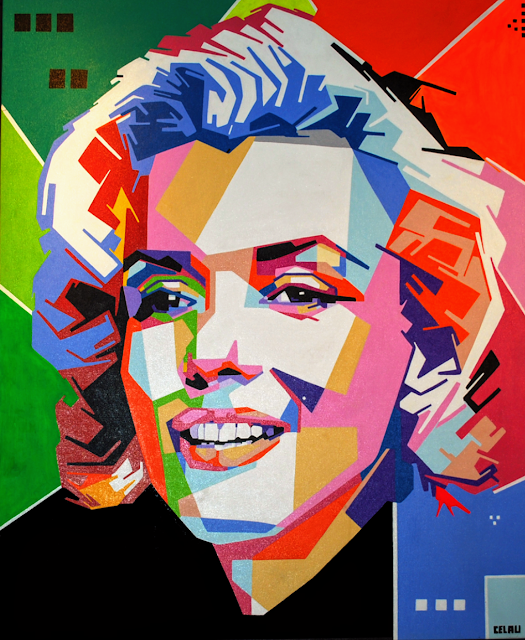 Another Gesture/ Um Outro Gesto/Eine weitere Geste/ presents four German and Brazilian female artists working in painting, drawing, and photography. The notion of “another gesture” suggests a two-fold approach: first, one that moves away from the dominant male legacy of abstract expressionism, in which gesture and opticality were used to champion purity and the uniqueness of painting as a medium. The artists included in this show, working today, and in two differing hemispheres, either acknowledge or incorporate this past, but beyond that, they cling on to gesture, not only as a visual element, but as a conceptual vehicle for humor, for refusal, narrative, or memory. Second, within the word “another” there is a subtle play with the idea of being other to someone, a slight reference to the otherness that haunts historical relationships between Brazil and Germany.

These historical ties are mostly known in regards to colonial expeditions and German immigration to Brazilian territories: most famously, in 1557, the German explorer Hans Staden wrote about his capture by the Tupinambás and their cannibalism, a notion that would permeate, in the early 20th Century, Brazilian intellectuals’ idea of Anthropophagy, a time when Brazilian critic Oswald de Andrade famously said, “Only anthropophagy unite us.” 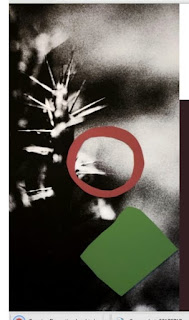 In the 19th Century, German traveling artists such John Moritz Rugendas and Eduard Hilderbrandt arrived in Brazil to depict its flora, fauna and native inhabitants. From the end of the 19th to the beginning of the 20th Century, German immigrants settled in cities all over Brazil, escaping war and poverty; many German artists had a fundamental participation in the first São Paulo Biennials. In the 21st Century, with the art world’s globalization, German and Brazilian art institutions have sought to shorten the geopolitical and invisible distances between the two countries.
Although these historical ties do exist, in Another Gesture/ Um Outro Gesto/Eine weitere Geste/ we eschew them to tell yet these women artists’ stories: we interrupt this rigid transnational narrative to create alternative ones through the idea of “gesture” as a generative theme. “Another Gesture” thus become an open-ended, consciously ambiguous, and fluid space, in which these artists, from different backgrounds, can navigate.
Dates: 3rd to 20th August, 2017 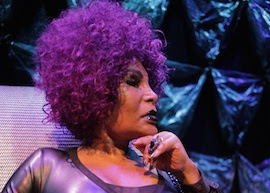 Elza Soares
Elza da Conceição Soares has achieved what most people can only dream of. She has remained a superstar in her field for over six decades, melodically soaring through the ages. A native of Rio de Janeiro, Soares began her professional singing career in the 1950s, when she joined Mercedes Batista on a dazzling samba tour of Argentina. Her popularity grew exponentially when she released her debut Se Acaso Você Chegasse, in which she invoked a Louis Armstrong flavor as she incorporated jazz into samba-scat riffs. From there, she relocated to the bustling São Paulo, where she illuminated clubs and theaters with her signature raspy, boisterous voice. Soares’ next album, A Bossa Negra, saw her star continue to rise, as she was invited to represent Brazil at the ’62 World Cup in Chile. Now known throughout South America, the luminous Soares would partner with vocalist Miltinho, and they would co-record three potpourri style albums,Elza, Miltinho e Samba (Volumes 1-3). By the 1970s, she was touring all over Europe and the US, enthralling audiences with her hallmark husky and impassioned tones. A few decades of unwavering, joyous singing later and she would be named “Best Singer of the Millennium” by the BBC in London in 2000. Soares has remained vital and current; her 2004 album Vivo Feliz featured the single “Rio de Janeiro” (a tribute to her birthplace), that mixed samba and bossa with electronica. In 2016 she put out A Mulher do Fim do Mundo (“Woman at the End of the World”), and sang at the opening ceremony of the Rio Olympics. Truly a living icon, Soares is a gift to experience live.
Liniker e os Caramelows
Deep in the lush countryside of Brazil, a gifted gang of like-minded musicians came together. Led by the effervescent Liniker Barros, a transgender vocalist, Liniker e os Caramelows was assembled – never dreaming that they would one day tour the world, spreading their uplifting music. The first tracks that they ever recorded were based off Liniker’s personal letters, and thanks to the far-reaching power of Youtube, this band’s up-tempo songs spread like wildfire (over 10 million collective views). Performing at Brazil’s most important festivals, from São Paolo to Rio, they soon became a national treasure. In 2016 they delivered their first studio album Remonta, and added new members for the subsequent tour (bolstering the sound with keyboards, percussion and saxophone). With unbridled enthusiasm, they are now poised to wow the world stage.
Teleseen
Teleseen (DJ set) Special project of global underground DJ, a mix of deep & afro-house, samba and baile funk  The primary project of nomadic DJ, producer and multi-instrumentalist Gabriel Cyr, Teleseen weaves together musical influences from the global underground into a refreshingly unique mix. Manifesting in freewheeling DJ sets, and a wide variety of his own releases and production work for other artists, Cyr’s musical vision draws equally from deep house and afro house, samba, batucada, baile funk and MPB influences absorbed while living in Rio de Janiero, Brazil. He also adds to his worldwide dish of musical experimentation the sound-system culture of his hometown of NYC. Known for his shifting polyrhythmic programming style and psychedelic synth work, Cyr has released records on 100% Silk, Feel Up Records, Boomarm Nation, Percepts, and Goldmin Music. His latest album, The Emotional Life of Savages, is due out in the fall of 2017, as his fans eagerly await to hear what new, funky and internationally-imbued beats he’ll merge together.

Music fans in the US will soon have a chance to hear an exciting new voice emerging from Brazil’s diverse music scene, singer/songwriter Aline Muniz. With three acclaimed albums already released in Brazil, Muniz is highly regarded for her sophisticated compositions and sultry vocal style, and her US digital debut ALINE MUNIZ / BRAZILIAN POP MUSIC, to be released on May 26th, will introduce fans stateside to her fresh global pop sound. Showcasing a broad range of influences from bossa nova, classic MPB (Música Popular Brasileira) to electronica and pop, Aline collaborated on the song selection with acclaimed Brazilian producer Béco Dranoff for the 17-track collection, which features popular original songs from her three previous albums such as “Mensagem de Amor” and the recently released track “Eu, Você e Mais Ninguém” (You, Me and No One Else) featuring a stunning video filmed in NYC’s Meatpacking District which has garnered close to 500,000 views, alongside Muniz’s exquisite reinterpretations of songs including “Ribbon in the Sky” (Stevie Wonder), “Tempos Modernos” (Lulu Santos), and “Jack Soul Brasileiro” (Lenine).
The daughter of one of Brazil’s leading TV and stage actresses, Aline was immersed in music and the arts at a young age and discovered her passion for music while studying at the renowned ‘Casa do Teatro’ school in São Paulo. Following university, Aline continued honing her musical skills by playing with various local bands while writing and composing her own original material. In 2008, Aline released her debut independent solo album “Da Pá Virada”, whose lead single “Básica” generated huge national buzz and visibility. In 2011, Aline released her sophomore album “Onde Tudo Faz Sentido”, which solidified her position among the new generation of MPB (Música Popular Brasileira) artists.
2014 marked the release of “Outra”, Aline’s third album and first with Sony Music Brasil. Several singles from the album received strong radio airplay and the videos for songs “Dançando Com a Vida” and most recently “Eu, Você e Mais Ninguém”. Aline relocated to New York City in 2016, now her new homebase, and is also studying at NYU, Berklee College of Music and New York Film Academy.